…a blanket for me this time. I´m thinking garter stitch and the whole blanket in one piece in the “log-cabin” method…

I´ve got 1 kilo of this great 100% Portuguese wool, from the lovely Rosa Pomar´s store: Retrosaria

The yarn is called Beiroa, and this is how Rosa describes the yarn (from the web site):

I actually bought the undyed yarn a few years ago, and started a sweater project from the book: “Natural Knits” (Jane Ellison) / the Mirasol project. Great book with some very nice designs. But my gauge was way off, and the Beiroa has been brewing on my shelves ever since. Finally I know what to make, and that´s always a good feeling! So I had to add some more colors to my Beiroa stash, and ordered 1 skein of each of the colors: 515 yellow, 685 anthracite and 688 ocean 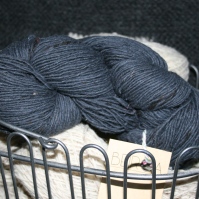 This will be a smaller blanket than my Big Blanket Project, and I know myself well enough not to set a finishing date!

Calling the wild back to craft

Things are not as they are seen, nor are they otherwise

A story about knitting, crochet and words

Did You Make That?

Leading UK sewing blog where we believe creativity is contagious

Musings from the ladies at Eat.Sleep.Knit.

Living in Paris, knitting and learning to daydream in French

Ramblings from an obsessed knitter