A whole book about the «Marius» sweater, -one of (in my opinion) the three most popular Norwegian knitting patterns. It´s a beautiful book, -filled with both traditional patterns and new and quite inventive ways of using the «Marius» pattern, all presented to suit several levels of knitting skills. I´m guessing this book has contributed to the formidable amounts of «Marius» sweaters currently walking around. I love the fact that knitting is back in fashion in Norway, and I don´t mean just knitted items, because they have, in one form or another always been fashionable. But the fact that knitting, -as in actually buying the yarn, casting on and moving the needles to create a garment, has become «the thing to do».

Old knitters …well ehm, as in «Old»…. like me, are walking around a bit more proud of our skills, and knitters more new to the technique are confidently joining the parade.

But I didn´t buy the book. I would highly recommend it, but I have the pattern archived in my head. I´ve knitted it several times before, and I also have the written pattern in various editions, -the first one from the 60´s….

The other book I held in my hands was this: 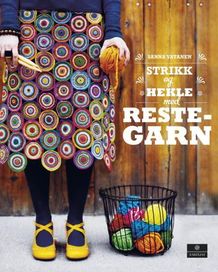 Sanna Vatanen is Finnish, and the book is translated (to my knowledge) to Swedish and Norwegian. The cover draws my attention, and the content reflects the cover. Love that about a crafts book! It´s filled with great ideas on how to knit and crochet using your scrap yarn, all well presented in a colorful and inventive way. …and when the front page model is wearing yellow John Fluevog shoes…. need I say more:)

But I didn´t buy this book either. I know who to borrow this book from.

So I left the crafts shelves, suddenly thinking about the book I only remember the title of whenever I´m in this particular book store. But they still didn´t have it….. Internet is the murderer of small town commerce. I´m aware that my local store, of whatever trade, can´t carry every little item I ´m currently in the pursue of, and going home to press the buy button on your computer is very easy. So I found a book for my daughter feeling very pleased for being politically correct, -buying locally. And then I saw it! Not a knitting book

as such, but very knitting related. A book about knitting UFO´s. I could vaguely remember reading about this art project some years ago. I brought it home and spent a few hours giggling. Apart from really enjoying the pictures and the stories, I felt something that can´t be translated into English. And the only reason for this is that the word and the concept of the word simply doesn´t excist in English. The Germans has it: «schadenfreude», as has the Scandinavian languages. In Norwegian: «skadefryd». It basically means the joy you feel over other people’s misery! Not the proudest word, -I know!  The excellent Australian stand-up comedian Adam Hills makes a really enjoyable point of this in one of his shows (either «Characterful» or «Joymonger», -can´t remember which). I brought the book to my knitting-cafè this evening, and the restrained giggles as the book passed around the table made me realize I wasn´t alone in feeling «skadefryd» when seeing other people’s knitting-miseries splashed out for everybody to see. We all have them, on the bottom of the knitting-basket, in the far back of the shelves in the house´ most untidy room or as I once did; -framed the lonely glove, signed it, named it «One of a Kind» and gave it to my father for xmas. It still hangs there on the wall, forever lonely 20 years later…. Remember the sweater only missing 1/3 of an arm, -or the pair of mittens with two right thumbs? Some unfinished projects ends up irritating you so much that you couldn´t even be bothered removing the knitting needles! But that´s the exception, -mostly the needles are left in because you still have a plan……

Calling the wild back to craft

Things are not as they are seen, nor are they otherwise

A story about knitting, crochet and words

Did You Make That?

Leading UK sewing blog where we believe creativity is contagious

Musings from the ladies at Eat.Sleep.Knit.

Living in Paris, knitting and learning to daydream in French

Ramblings from an obsessed knitter